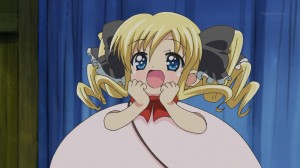 It’s finally here! Thanks to all that supported the studio and helped buy the Blu-Rays so we can get even more detective greatness. (lol right) KiteSeekers and Wasurenai once again team up to bring you the second season of Tantei Opera Milky Holmes. Your favorite lolis and moechars are back, along with that crazy guy we all know and love 😀 We’ve chosen to continue the series in 8-bit, as we did with season 1’s TV episodes. Despite the lack of staff available to work on this series, we’ve put in as much time and :effort: as we possibly can, though as usual if you do spot mistakes please say so and we’ll take note of them for the final batch. Do enjoy!

Oh, and ED engrish level>9000, so expect some (hopefully not too major) fixes once the official lyrics come out.

Translation will be somewhat staggered for the remaining episodes as university starts for this series’ translator, myself. Please bear with us throughout these busy times. Unless someone out there is willing to step up to speed up the process… no, that’s probably asking too much 😉

Finally, sincere apologies to the people patiently waiting for Anyamal; Webb’s laptop has crashed (or so we assume), and he has not been online for several days as of this time of writing. Recap episode 41 in particular is now suspended until we can retrieve the work in progress on his device.

Timing, Editing, Distribution: Ekke (Webbmaster62 for help on these when he comes back)

Distribution: Zdm321, , Ekke to the RESCUE

And special thanks to Eienshouko for helping to do something so important but he is too shy to let us say it.

Episode Title Note: The pre-title literally means “The Limit of Treachery”, and the post-title literally means “The Limit of Vegetables”. The pre-title “Candidate for Crime” refers to the 3rd episode of the 3rd season of the 1973 crime fiction series “Columbo”. The post-title’s yasai no hate is a pun of yabou no hate , the pre-title, with a different kanji in the first compound, so we picked a name, “Candidate for Cucumbers”, that would reflect the pun as well. As to why cucumbers, well… You’ll have to watch and find out 😉

Edit: We hadn’t realized that the real episode 1 raw used a preview different from the pre-air until too late (i.e. after final encoding was done). But we figured that releasing the episode sooner for you folks was more important than taking yet another day or two finding a good transport stream, downloading it, re-timing the script and re-encoding the video again. We will do a v2 for the batch that includes the preview and updated official OP/ED lyrics.

For those curious, the next episode’s literal post-title is ナイスなすし “Nice Sushi”. Another food-themed episode? Not unlikely. If I get enough requests here, I can do a translation of the real preview and post it as well.