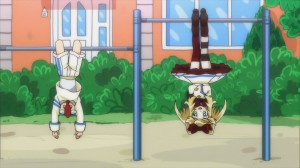 Here’s the next episode, back-to-back style! This should’ve been a double release, really, but wanted to save the second half of the release for Webbmaster62’s birthday today. Everyone, let’s give this man here our thanks for having co-founded Wasurenai and being one of the hardest, most badass workers in the group (main management of TWO groups at once takes some skill, I tell you). Lolis and *applause* are now in order, and though I may be able to supply the first requirement with this episode, we’ll have to make do with the second by dropping by in IRC and simply leaving a message for him. Or just leaving a comment here for the lazier folks out there 😛

Anyways, we are chugging along into the final stretch and releases should be steady, more or less. Just bug SilverDragon and namaiki in IRC if the next episodes don’t come out for awhile. Today we bring you bats, some HHHNNNGGG*censored* scenes, extreme salt licking(no cows were harmed in the making of this episode) and the wrath of Leviathan. 「笑」