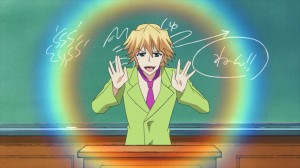 Surprise! Didn’t expect this one, huh? Well, we’ve finally moved on to the blu-rays after some raw delays. That said, we see that there are 3 live-action special clips, one of them an HD cosplay sing&dance video, other two are SD resolution concert bonuses. We would like to ask people’s opinion on these; being as the same position as like a commentary audio track in other shows, should we leave them unsubbed? They’re just basically songs. Or we can just choose a font and slap on the english and romaji if preferred (no karaoke, too much time needed). Any suggestions are welcome.

No NCED/NCOP came with the disc as well, unfortunately. Possibly comes on one of the later discs. We’ll release them as separate files if they get included.