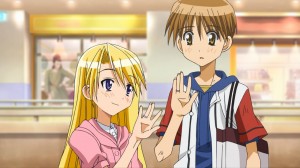 Well, what can I say… nothing really, no excuse this time, just totally late. Might be because of heavy snow storms, or Chinese New Year events, or high post-secondary workloads, or even capping problems, but shouldn’t really take an extra week and a half regardless, right? We apologize for the huge delay. I will take it upon myself to bypass some parts in the process for this week’s broadcast should it drag on too long. That said, our capper won’t be back until Thursday due to internet issues, so it’ll be rather late again. A big thank-you goes out to those who put up with the waits for our releases. ^^

On a side note, the OP has been updated with the official lyrics (heavy engrish crunching made this a PITA to re-time x.x), and the ED should be updated for the next episode.