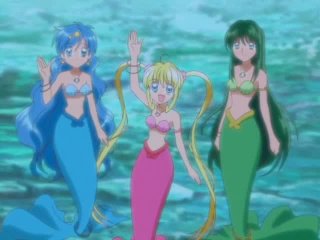 😉 Sorry folks, had to write out the full name at least once.

ANYways! That’s right, your friendly neighborhood mermaid, back on the scene, to present our continuing efforts on Mermaid Melody! I’ve got a lot to say in this post, so hang on~! *^_^*

First off! As I said in our release of ep 52, we’ve had a few staff members to thank for making Mermaid Melody finally happen. But having said that, too, we’ll be changing up a little bit with the start of this new series. Ekke will no longer be my cohort in QC. However! Choco-chan and I are still going to be double-teaming the editing! And what’s more, we’re more than pleased to bring Doll_Licca of Licca Fansubs on board! <Applauds> And a shoutout to tsuna-kun for a correct supposition on this. Tee-hee. 😉

I’m sure you noticed, but this was intended to be a biiiiiiig surprise and secret. I’m actually surprised none of the Licca fans called out on my notoriously slower-than-slow editing. 😉

<doll_licca> Remind me not to make promises that a project will be released.
<doll_licca> I just shot myself in the foot on this one.
<doll_licca> http://liccafansubs.blogspot.com/2011/01/update-on-unannounced-secret-project.html
<doll_licca> (trying to placate people who are complaining about the nonrelease of the "secret project")
<Lexica-chan> ;) tell them to go stuff themselves with chicken fat.

Clearly I’m a bit more… eccentric… than Doll. 😉 But at least the ball is rolling! Onwards and upwards! Let’s make this be the start of a long friendship! Mermaids x Licca x Wasurenai! *^_^*

Webbmaster62 ‘s Note on the Encoding: Also, before anyone comes on here asking why the episodes are all hardsubbed, I’m explaining it now. Yes, we are a softsub group besides certain projects, (a.k.a. Les as that was Aoi’s in the first place.) Yes, that is our policy and always will be. The reason why the H264 and Xvid are hardsubbed is because Doll-Licca is the TLer and the Encoder for this series as for the joint. It’s just that’s how he does his series. I know some are you gonna be upset about this and wonder why hardsub a H264? I was one of them and another in the staff as well, but the point is just to get this series done and subbed for everyone. That’s our whole goal. Will we be doing this in the future again? Probably not. It probably depends. As for people or other groups that were using our scripts for different languages, the decision is up to Doll-Licca and Lexica-chan on this one as they both play huge roles in the scripts. (Asairo won’t care what is decided as we do softsubs in our group anyways. XD) I will have no part or say on this series as I will only help out if needed.

Doll’s Note for V2s: The main differences between V1 and V2 is to fix some clobbered styles and the audio in the h.264 version has been reencoded to AAC.