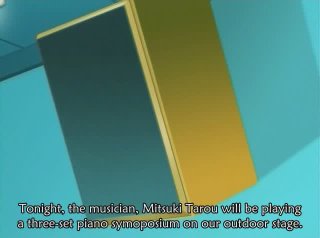 As I mentioned in my postscript before, I was hard at work, pulling out some stashed-away DVDs and making torrents for the various Mermaid Melody releases. 😉 The Lunar batch contains episodes 1-39, plus the infinitely rare trailer for the show. (I vaguely recall that Lunar’s own batch torrent for episodes 1-19 had some corruption in there…. this torrent has the REAL DEAL. <Gives Lunar Anime a golf clap>)

Now, some other interesting tidbits. Yes, we’re getting Pure worked on, so there’s nothing to fret about. 🙂 However, as I’m sure the astute might realize, this will otherwise leave the early releases of Mermaid Melody as being the crummy TV rips from 8 years ago (these TV rips cover episodes 1-17… they switched to DVD source at that point, but the styling doesn’t become what you know and love until episode 23). As such, we’re gonna put out an all-call. If you’re a diehard fish fan (fanfish?) who wants to join us in bringing these early episodes up to speed, please join us in our recruiting channel, #wasurede-recruit@irc.rizon.net.

As far as the skills which are involved in this, it’s not your normal fansub job. If you can type, you can copy the subtitles (and likely, you’ll discover typos in the original subs!). And while we are gonna need to retime to the DVD raw, it should be easy to copy the timing of what’s already there, in order to make that retiming that much easier. 🙂 Again, it should be straightforward, but it does require some effort.