And the Secret Project is… 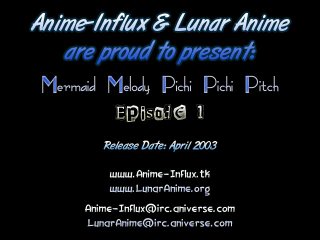 …. Oh, wait, I already used that line. 😉 No secrets this time around, so gonna make up for it by posting no spoiler pic. Instead, I’ll give you this:

So we’ve finally reached the end of this long journey. I know that, as a Mermaid Melody fan, that it’s been a long haul from start to end. As such, there are a few thanks I’d like to offer… <Cues the orchestra to start playing Pomp and Circumstance, March No. 1 in D on their kazoos>

Lunar Anime – To having done the first thirty nine episodes. No small feat, and for sure, we wouldn’t be here without the contributions and countless hours that made this happen.
Ekke – A good friend whom I met because of Mermaid Melody. 🙂 Without whom, I likely wouldn’t have eaten a mame daifuku. 😉
Webby and Asairo – The first staff members I’d met in these waters. You’re not rid of me yet! 😀
And of course, to the folks who we’ve been able to whirlpool in, due to working on this series. 🙂

And then there are some other “thanks”…
Sparhawk – Mermaid Melody wasn’t really the series to try to rebuild a fansub group with… sorry. Game over, insert 25 cents.
Dragosmore – For not responding to my PMs, but still being helpful through all of the translated songs… hurrah for the Wayback Machine.
Lunar Anime – Yeah, you get a second shoutout. :p Good job for holding this show hostage for years… that was some accomplishment. Too bad you forgot to pay the rent. Way to be, Wonderbread. PS: You can have your “secret” IRC channel back now, too. After idling in there for the past few years, it’s clear that your dedication is about as solid as tissue paper.

PS: No, I haven’t forgotten. Yes, I’m working on it. No, you don’t need to understand what I’m talking about. Yes, you probably care. 😉

Asairo edit: you also forgot about teme and choco.