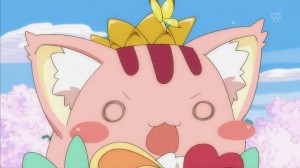 The episode you’ve all been waiting for! (I guess…) Quite a colorful episode – in more ways than one – if I say so myself. This week features scenes en-tail-ing the glorious world of Anyamal that we’ve seen up to this point. Extra kudos to WM62 for tracking down the specific lines we needed in various scenes – definitely not an easy task, as HAL Film Maker isn’t too good at making recaps IMO with the lines going back and forth between episodes (sometimes even going backwards in an episode. O_o;;). For those who are curious exactly how they cobbled up this episode together, we’ve left the episode references – complete with exact line numbers – commented within the script itself for each recap segment, so extract it and have yourself a good laugh at the frenzy if you so wish. That being said, some lines do not exactly match, as we’ve spruced them up and are planning to use them in v2 batches later on. That also being said, we are presented with a dilemma: Do you folks want us to make an exact halfway batch of the series (Anyamal being 50 episodes, so that would be episodes 1-25) or a batch at the producers’ take on the halfway point (everything up to this recap, as a new “arc”ish starts on episode 30, plus an AWESOME new ending song!!! – so that would be episodes 1-29)?  Any suggestions are welcome.

P.S. Yes, WM62 and I are fixing up the parts of 1-14 that weren’t in this recap as we speak. Expect a new marshmallowy touch on your favorite early eps!

P.P.S. Also, as stated below, we’re using nyaa until anirena is back up. We might also have to redo all our torrents again for site…but we’ll see….