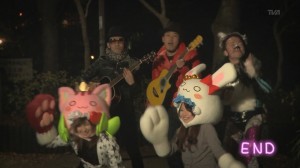 And so as shown by the above picture, this episode marks the end of the mini live-action scenes at the ends of the episodes. I would’ve thrown up another picture but everyone there, cat-cosplaying man included, has tried so hard that I’m sure everyone would agree that they deserve a proper send-off. Some pretty amusing skits so far, I must say. If anyone sees them prowling around in their yard, be sure to give them your thanks – and maybe a can of tuna or two! Therefore all episodes after this shall no longer have live action. I hope you’ve enjoyed them as much as I have, folks!
Which brings us to the main episode. The story in this one seems to be an introduction of some major drama later along in the series, the continuation of which I haven’t even encountered insofar as of my current translated episode – as such, the episode title may change later on as I get to it.
More kudos to BF than usual for pulling through over six encoding tries – the transport stream raw wasn’t corrupted, but the encoding itself seems to be cursed. O_o Thus the brief delay, sorry about that. Here’s to hoping his PC gets over its encoding flu soon 😀