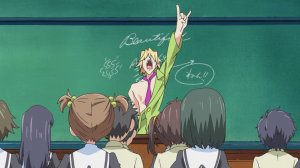 It’s out!! Finally huh?! Sorry for the delays, we’ve been working relentlessly trying to make this release perfect. Sometimes it felt like we were building a rocket or something lol, I swear. Anyways, to reiterate the introduction post, this is a joint project with KiteSeekers and we’ll be trying to get this out on a weekly basis from now on. Second episode script is already well under way ^_^ Thanks to all the people involved and their great effort. Staff for this project is as follows:

We’ll be doing these in HD MKV and SD AVI, as usual. Still recruiting typesetters! And more Yume and Mari extremely soon!