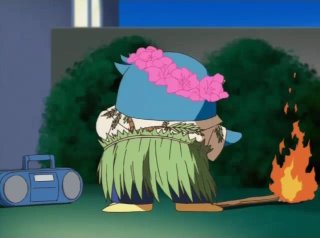 Nyu! Your friendly neighborhood mermaid, bringing you yet another quality mermaidy release! *^_^* First off, before I actually get rolling, I would like to wish a hearty (and belated) congratulations to all of the lovely schoolage fishies who have now made the transition to summer vacation. 😉 Even moreso to those who just recently graduated. Among this group is our very own Choco-chan… way to go! WHOO! *^_^*

Anyway, as I’m someone is already asking themselves “you know, this is episode 47 out of 52… something’s gotta happen, right?” Yeah… this episode ain’t it. 😉 I mean, what do you expect, really. Karen makes a bit appearance (which rubs me the wrong way, actually. She didn’t even sing! 🙁 ). To her credit, though, she probably has the best line in this episode. Which I won’t reveal, because she only has three lines anyway. It’ll probably stand out like a sore thumb and make you go “WTF?^^ mate.”

And speaking of “WTF?^^ mate,” a suitably selected picture of Hippo mooning the camera. Well… almost. It’s so hard to tell since he’s got no legs or behind to speak of. :p

As always, we’re up for more staff members to help us do stuff! Time, edit, TL… if you’ve got the skills, we’d like to hear from ya~! Of particular interest would be a TL for Pure (since we’ve already said there’ll be a break between finishing Mermaid Melody and jumping on Pure), as well as someone who’s an experienced DVD encoder. I can supply some nice shiny DVDISOs of Mermaid Melody Pure (Where from? Ningyo no hi~mi~chu~ *^^*), but they need to be made from VOB into something we can actually use. I suppose it probably should go without saying, but I’ll say it anyway…. if your whole of DVD encoding experience is using something like Handbrake, that’s not what we’re looking for. We’re aiming more for someone who’s much more familiar and more involved in the encoding process than a few buttons allows for (ie, know how to use YATTA and how to do a good IVTC).

Being a fishie who likes to proliferate knowledge (and not wanting to completely shut out those who don’t know what I’m talking about), go look up “Zhentarim encoding guide” on Google. :p It’s years out of date and older than dirt, so reading that isn’t gonna get the job. What I am trying to convey, though, is that for those who have never stepped out into the world of video encoding, there’s more to video encoding than a few mouseclicks.

That’s all from me for now~ But don’t worry, you’ll be hearing from me again soon enough… <Mysterious giggles> 😉