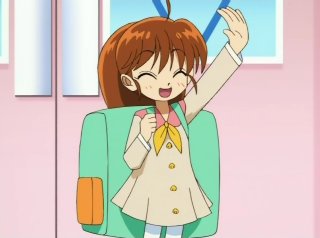 Heya, everyone! It’s time for a semi-periodic update from your friendly neighborhood mermaid. I’m sure many of you were hoping for a Mermaid Melody release now… as was I. Alas, it’s not ~quite~ ready yet (It’s on Ekke-sama’s plate, which is the final stop prior to release… positive waves and mame daifuku are good encouragement). It is ready! Just hook up with the post above for the news.
This post is of a different nature. 😉

Two years ago today, the Japanese model/actress/singer Kanbe Miyuki passed away. If you’ve watched any Mermaid Melody, you’d know some of her work: she sang both Taiyou no Rakuen ~Promised Land~ and Rainbow Notes, the two opening songs for the first season of Mermaid Melody.

I myself have few words to say regarding her life (what can I say, I only really knew her work through Mermaid Melody), so on this point I’ll defer to a few other sources.

I myself had found out about this a few months afterwards, and last year I gave a small tribute to her, in my own mermaidy way. This being a second year, I figured that I should try to follow suit again. 🙂 And, of course, being thousands of miles away, it makes it a lil hard to lay flowers at a gravesite. So, gotta make due with what I got. 😉

As such (and part of the drive of this post), I’ve been able to gather together her entire Discography (which really just encompasses the two OP maxi singles) in lossless wonder. 🙂 Rest well, sweet princess, and know that your voice and your memory live on, as does the love of mermaids. <Bows> *^_^*

Sorry about there not being scans on these… the source I got these from didn’t include any. *x_x* But I figure that lossless music is more important than missing a few scans. Besides… that’s what Google Images is for, right? 😉

P.S.: Considering that I’m pushing out a lossless release, I felt I should also take a moment to give a shoutout to guuchan of LosslessOne. Over the past five years, you’ve contributed to what some would call a standard in lossless music releases. And I’ll admit, more than a few of your releases have found their way into my collections. 🙂 Here’s to your future endeavors, wherever they may lead. 🙂 <Bows>