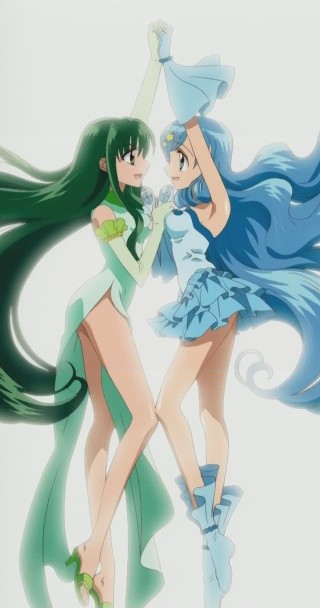 First off, before I get too involved… I have some belated credit to give. Some late thanks go to Kayron for the contributions in the previous release. 🙂

Anyways. As it happens, both Ekke and I have been floating around for a number of years (in fact, it’s how we met. I was a lowly mermaid on IRC, and Ekke-sama was offering Mermaid Melody raws). 😉 And what’s more, we were talking about it recently, and we realized that it’s been four years this past January. 🙂 It’s been a rawrsome four years, with many fun times, and I do hope that the fun times continue. *^_^* <Snugglwugglz~>

One of the many highlights over the years was a rather infamous storyline/play I wrote, and there’s been some discussion that I deliver further sequels. So, to get everyone up to speed, I’ll be posting them here, in digitally remastered quality (It’s text on a computer anyways, so how much digital remastering do I really need to do?) 😀

So, without further ado, I present to you a rebroadcast from March 24th, 2006 of…

Mai: RAAAAAAWR! Die mermaidy scum! I spit fire at you! *PTUI*
Lucia: Aha! A water demon! Let’s sing at her!
Rina: I’m not sure about that… she doesn’t look like she has gills….
Hanon: KYAAAAAA! My blue hair is singed! Face the wrath of our pichi-pichiness!
Coco: Hey, if we sing off key, we might be able to defeat her faster than the other water demons….
Rina: Uhm…. who are you?
Coco: Oh…. never mind…. <Pouts in corner> *-_-*
Mai: INSOLENCE! Eat fire and smell like roasted fish!!!

Mai: *YAWN* Are we there yet?
Lucia: We won’t forgive you for burning Hanon’s hair!

*Stock footage of the mermaidz singing some random song…. Mai winces in pain…. about another 10 minutes later….*

Mai: Aaaaaaaaaaaahhhhhhh!!!
Karen: That’ll teach you, random fire-girl…. 😛
Rina: You didn’t do much of anything, Karen….
Karen: I’ll make up for it next time.

Will there even be a next time? What’s the name of the big dragon-thingy which we didn’t see this episode? FIND OUT next time!